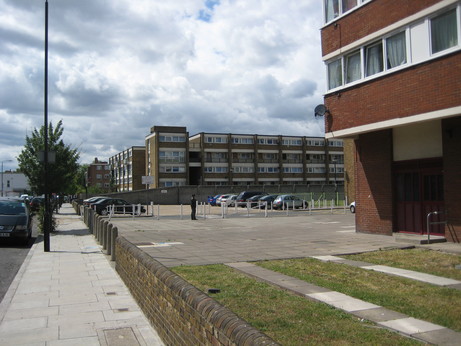 Click here to download the before & after open space plan from EEH & Leaside Regeneration.
You may be surprised to know that for the purposes of the current planning application none of the land in the photograph above around Ennerdale is presently considered “public open space”
The existing paved forecourt around Ennerdale for example is not considered by Eastendhomes to be open space and therefore is not “lost” during the proposed build but paved areas to be laid on the grass during the build are presented to us as a “landscaping miracle” and bundled into the after build open space figure along with other snippets of land around the estate that anyone without a vested interest in these plans would consider as open space already.

In documentation supplied to the Strategic Development Committee by Eastendhomes and Leaside Regeneration to assist them in their decision about the future of our estates they describe valuable open space like this….

Remember these quotes are taken from documents that are supposed to inform the Strategic Development Committee and assist them in making their decision. It is not meant to peddle the impression of an urban wasteland only fit for building on.

Click here to see pictures of major proposed sites
Even the grassed area (1,122 sq m – Site 8) between the bridge/footpath and Derwent House is, for the purposes of the application, presently classified as “Existing Private Communal Open Space”. Though easily accessible 24/7 through an unlocked gate.

After the proposed build this land will be surrounded on all sides by buildings and accessible through a couple of gates 2.4 m high during the hours of daylight and this will be added to the gained open space figure. Before…… open green space easily viewed by all – after…. surrounded by buildings, out of sight but miraculously liberated (well most of it) from nowhere into the gained open space figure – clever eh?

Below – The land EEH are “giving” us as open space

Three residents (Ané, Lene and Mark) spoke against EastendHomes’ planning application. Two of the prepared speeches can be viewed below; they only […] EastendHomes have not consulted residents properly on their building plans, so residents from Eric, Treby and Brokesley organised a public meeting for […] Strategic Development Committee…….Decision has been deferred until the next meeting – Thursday 25 June at 7.30pm (please note they have changed the […]