I am writing to object to the planning application that has been re-submitted by EastendHomes for the Eric, Treby et al estates.

Firstly I am appalled that these plans have been accepted at all as they are in all affect just a re-hash of the previous plans that were refused and turned down at the last planning meeting. 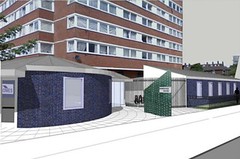 There have been no significant changes made in these “new” plans that address the objections made from the last plans. There has also been no attempt to consult with any of the tenants on the estates concerned or liaise with any concern residents association to discuss the issues previous raised and that continue to be a part of these “new” plans, apart from a half baked attempt at surveying the tenants with some obscure and loaded questions. The concept around consultation is to hold meetings and talk to tenants before the submission of plans and not afterwards or during as this becomes information giving not consultation so to assume that this pretence at consultation is at all relevant or meaningful is a sham.

The objections raised previously regarding lack of open space after the proposed planning has taken place has not been considered in these “new” submissions which means that they have blatantly ignored any concerns raised on this issue and as such intend to build on any available space. This effectively means they propose dumping and leaving all tenants and residents in an enclosed, walled up environment with limited light, limited space which also then creates an ideal and potential increased environment of rat runs for crimes against the then cramped and isolated community. 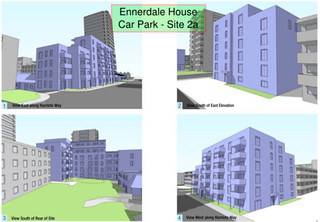 Remember once these so called “plans” have been implemented there is no turning back and although it may seem like they are meeting the needs for the present they are in fact destroying the community of the future with their little thought out and destructive imagination to justify the “needs” of the moment. Building needs to take into consideration the “needs” of the communities that exist and the potential of those communities to grow in the future in harmony and hope not walled up and cramped in inhospitable and frightening territory. History is supposed to teach of the pitfalls and mistakes of the past and therefore learn not to repeat the same mistakes, so to have any belief that these plans are justified would be making a mockery of history and the lessons that were supposedly learned from designing cramped and inhospitable estates from the sixties and seventies. People need space and light to live healthily – ask anyone.

There have been numerous other issues raised by other concerned tenants regarding lack of light, the proposed height of the buildings, the refuse collection, fire escapes and safety and all of these issues are real and justified and warrant discussion and consultation before any submission of plans and not used as minor sources of implementation after the fact.

There are further issues regarding the ability of the neighbourhood to sustain the proposed amount of people that would move into the neighbourhood if these plans have been agreed such as provision of primary schooling for the children. Existing families are already facing the problem of finding places in various schools as it is, let alone trying to compete with even more families moving into the neighbourhood. There is also the issue of parking. Yes it’s a very tricky and contentious subject in these times as we all acknowledge the need to reduce carbon admissions and work towards a greener more sustainable environment, but we also need to be realistic as well. More buildings mean more people which means more families. More families, in reality, remember we need to be realistic when considering plans not only for the present but also for the future, mean that they will use cars to access the schools and shopping and all the other amenities that come with having a family, especially large families which will predominantly be the case. Therefore the plans need to take this into consideration as well, just stating that the new buildings will be car free with the expectation that nobody moving in will purchase or own a car in the future is being naive in the extreme and will only cause chaos and problems in the future.

There is also the objection to the proposed offices at the base of Ennerdale House, I live there and most certainly do not want to have any more of my valuable space and light taken up by an unnecessary carbuncle being built onto the existing building. Especially when there is no justification for doing so as perfectly good offices already exist in Southern Grove that can be used or utilised.

I am also deeply concerned that East End Homes have made the statement that they are unable to complete the already agreed renewal and replacements to the decent homes standard of the existing blocks unless the planning application goes ahead, which is completely contrary to the offer document and agreement made which states that they will pay for all of these renewals through borrowing money from the bank not from profits from privately let flats which now seems to be their claim.

Overall these plans will destroy the environment and isolate the community. They are ill contrived and ill thought out and seem to stem from the need for East End Homes to make considerably more profit from the privately let flats that having any real concern for the community and the needs of the people living there at present or indeed in the future.

I therefore implore you to vote against these plans and therefore give everyone the opportunity to proper consultation and properly and correctly explore more appropriate and considerate ways to build for the future.

Yours sincerely and in trust
an Ennerdale resident One thought on ““Re-hash of previous plans ” – an Ennerdale resident objects:”