Following an application to the Leaseholders Valuation Tribunal (LVT) for determination in relation to a number of EeH’ unfair service charges at St Georges Estate, EeH conceded the following:

Apart from the obvious errors in the service charges that were conceded by EeH, the LVT failed to appreciate that the cost of services in relation with the scandalous state of neglect that the estate is in, is unreasonable and extortionate.

Doors permanently broken and landings covered with bird mess seems to be EeH’ version of Decent Homes for the communal areas!

This is the condition of the access stairway that the LVT found “reasonable”. 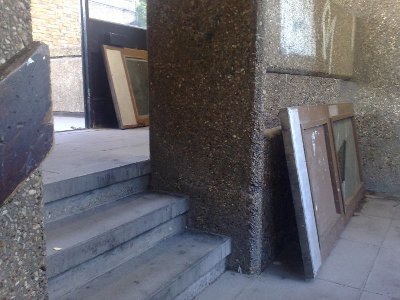 The battle will now continue at the Lands Tribunal. 1. Consent was granted by LBTH Strategic Development Committee in August 08 for an application for development consisting of 139 ‘market units’ […] Eastend Homes Ltd have a long and glorious history of ineptitude in a variety of areas, In fact an inebriation session in […]